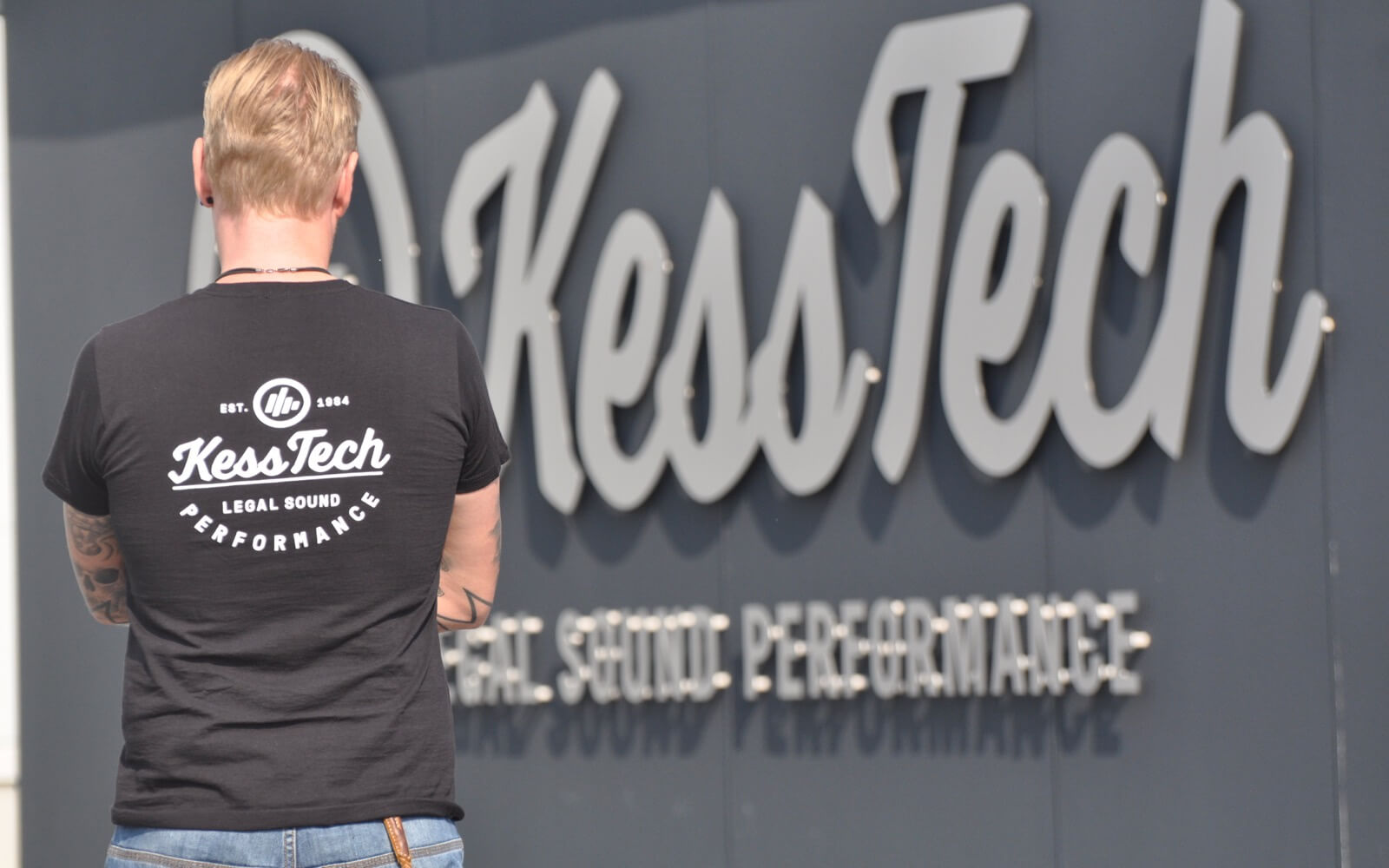 Everyone starts small. Roland Kess, the founder of KessTech, shows with his success story that it doesn’t have to stay that way. From the start, Roland Kess was dedicated to a passion for motorcycles. For example, after completing his apprenticeship he became a master mechanic for motorcycles and cycles.

The Space Shuttle DISCOVERY starts to its first flight. Joseph Kittinger crosses the Atlantic Ocean in a solo flight with a gas balloon. Under the cheering of the computer industry, Apple launches the Macintosh onto the market.

In year 1984, petrol-head, and young motorbike mechanic Roland Keß founds his motorcycle workshop. Selling, repairing or customizing standard Harleys – only within a few years, Roland Keß becomes a reference in the Harley scene. Keß and Harley belong together as Route 66 and Easy Rider.

The introduction of the EC type approval, which regulates emissions behavior and sound emission, challenges the Harley scene. Roland Keß and his development team dedicate themselves to the idea of building legal exhaust systems, and which at the same time allows riders to experience the typical Harley-Sound.

With reflectionary end mufflers Panhead 1 and Knucklehead 1, in 1997 KessTech makes the breakthrough: the first legal exhaust system with a stationary noise from 101dB(A) is born.

With the appropriate TÜV-part certificates these systems still are certified at the TÜV. This revolution changes the orientation of the company – from now on, the production and further development of damper systems becomes the main business.

The Association for Technical Inspection and regulation body, in Germany called the TÜV certifies KessTech – a first and certainly a major milestone. Moreover a novelty for the German Harley-Davidson scene.

MMV stands for mechanical manual adjustable sound systems and is another milestone within the KessTech history. The exhaust valve, which is the major feature of the MMV can be opened and closed mechanically with a simple tool within a few seconds and thus permits the exhaust system to attain EC type-approval.

2003 – Exhaust systems made by KessTech

Starting 2003, KessTech develops all of its exhaust components in-house and is able to offer its own exhaust covers with finishing choices in polished and chromed stainless steel. Finally, a complete exhaust system with a recognizable KessTech design is available.

With the electronical adjustable damper system ESM1 (which stands for „Electronic Sound Management“) the rider has the possibility to activate or to deactivate the sound management at any speed or gear. The exhaust system is conform to EC 97/24 in every switch position, thus always legal. While activated, the sound level is controlled automatically by the exhaust electronics, in such a way that the sound level and engine performance comply with the respective applicable laws. The ESM1 is replaced by the ESM2, which provides a unique, distinctive and unmistakable rich sound.

A big black show truck goes on tour. Roland Keß and his team conquer Europe – on almost every motorcycle event you can find the KessTech team. With fascination, the Harley community listens to the unique, distinctive and unmistakable rich and legal sound of exhaust systems made by KessTech.

Roland Keß passes on his lifework to the next generation with joy and sadness at the same time. His daughter Pamela Keß becomes one of the shareholders together with managing director, Christian Schütte. Together – they plan to lead the company into a new era.

For the first time in the company’s history KessTech does not develop exhaust systems for Harley-Davidson models only, and has decided to extents the exhaust system program to the Bavarian cult brand BMW. BMW dealers welcome the exhaust system offering while at the same time BMW bikers cannot believe their ears… Since then, the product range for BMW models has been increasing steadily.

In December 2014 – almost 30 years after founding the company – it is time for a new home – shortly before Christmas Christian Schu?tte and Pamela Keß provide their employees with a new home – a brand new KessTech facility is opened. It was time for KessTech to grow up and have a facility that reflects the professional attitude and high quality. Mindful and confident and from their new home the KessTech team is looking into the future, developing state of the art exhaust systems for customers around the world.

2016 – Planting the seeds for the future

KessTech is growing – with more than 60 employees we have doubled our team within the last three years. Our dealer network is getting bigger and bigger. Besides Harley-Davidson, we now inspire BMW riders with an increasing product range. We are very thankful for our success, yet will not stop questioning and continue to be driven to develop the best legal exhaust systems. Every morning more than 60 employees get up and start their work with only one wish: making our adjustable exhaust systems better and better!

Vroom! May 2017 will be the start of a new era. The KessTech System ESM becomes ESE ("easy" - Electronic Sound Experience)! ESE is not just an upgrade but a completely redesigned system that redefines the unique driving experience and provides the unmistakable exhaust sound you have come to expect from KessTech once again. In order to make ESE a reality, we have not only changed the button, redesigned and reprogrammed the electronics, but installed new motors and also completely redesigned and constructed a new exhaust valve. It's time to experience the original and unique driving experience with KessTech – Take it ESE!

With the Power-Feature and the Active Engine Protection feature KessTech already brings two absolute innovations to the market. With the Power-Feature in the OFF and the MEDIUM mode, there is an additional burst of power available. ESE automatically detects when a rider suddenly requires more power (for example while passing or in a dangerous situation that requires immediate power) and delivers the additional power without that the rider has to change the mode. The Active Engine Protection feature takes automatically care about the "emotional state" of the bike. When ESE detects that the vehicle engine is getting hotter and hotter in the OFF mode, for example at a red light, the valve opens automatically a little bit in order to reduce the exhaust gas back pressure and to let the heat go out. If the driving profile changes to a thermally more uncritical situation, ESE will change to OFF mode again.

KessTech starts the new decade with new power! 2020 KessTech adds a new brand to its portfolio! Starting in April, the best sound is now also available for the heavy weights of the cult brand Indian. The long-awaited wish of many bikers will thus come true. With "Deep Spirit" KessTech creates the perfect sound for Indian Bagger, Challenger, Cruiser and Touring. Great, deep, warm sound and a great design – perfect for the typical Indian spirit!